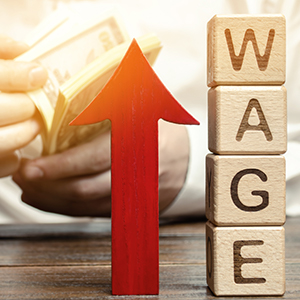 According to the Office for National Statistics (ONS), averages wages in the UK are growing at their fastest rate since 2008.

The ONS has revealed that average earnings, including bonuses, grew by four per cent in the four months between May and July. This is the highest rate in a decade and means that wages in the UK have been rising above the rate of inflation for 18 consecutive months.

Even with bonuses removed, average wages in the UK grew by 3.8 per cent during the same period. Pay has been boosted in recent years for many employees thanks to higher rates of employment and the Government’s increases to the National Minimum Wage and National Living Wage.

David Freeman, Head of Labour Market statistics at the ONS, said: “Including bonuses, wages are now growing at four per cent a year in cash terms for the first time since 2008. Once adjusted for inflation, they have now gone above two per cent for the first time in nearly four years.”

Tej Parikh, Chief Economist at the Institute of Directors, added: “At a testing time, the labour market is surpassing expectations, though there are early signs the jobs boom could be cooling down. As so many people have entered work, there has been an uplift to household incomes which has helped to keep consumers ticking.

“For a long time, businesses have been eager to expand their workforce despite difficult economic conditions. With the supply of available workers shrinking and uncertainty lingering, firms are now beginning to dial down their recruitment ambitions.”